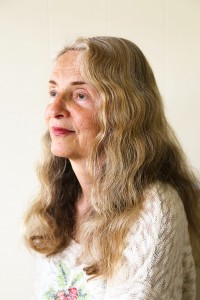 Anita Vik Wætthen was born and raised in Sykkylven and lives in Molde. She received her artistic education at tne National College of Art and Design and the Norwegian College for Teachers of Arts and Crafts. Since the early ’80’s she has had a succession of exhibitions at galleries and art centers throughout Norway. Her work has also appeared in tne U.S.A. in both solo and group exhibitions. In addition, she has carried out many decorative commissions.

Wætthen’s paintings hold an immediate appeal. The colors are so fiery and luminous that they hardly resemble the characteristics we have come to expect of aquarelles. To the artist, colors represent a language without words, and can accordingly convey a great deal in themselves.

To oversimplify, one might say that her working process begins as a symbiosis between the accidental and the imposed will of the artist. This method of approach is interesting as a process in which the finished work is not achieved through rigid manipulation of a medium toward a previously imagined end result that is already decided in advance. In a way, the images get to live their own life; they arise of themselves and lead the artist further into the work. In this way, there is a place for both order and chaos in paintings by Anita Vik Wætthen. And there always remains in them an element of the abstract and intangible.

In Anita’s finished pictures, the imagery is nearly as exciting and surprising for the artist herself as for anyone else. Nothing is established in advance, for Anita respects the process and the chance elements which assuredly will emerge.

And so it often is in life; that “the path comes to exist even as one is walking upon it.” Unforeseen occurrences affect the shape of our lives. However, we are not helpless victims of happenstance; for the way we choose to relate to and make the best of whatever destiny brings us will to a great extent determine how our lives are realized.

One can say that Anita’s initial creative process parallels or is even a microcosm of life’s intriguing combination of choice and chance, and the amount of freedom and fantasy we allow ourselves in our responses. That we are each a part of a greater unity, that we are each connected to everything that happens in the world: all this is reflected in Anita’s work. In these paintings, grief and joy are juxtaposed with each other as light and shadow, and give meaning to each other. These great contrasts live in a balance of mutual dependency.

All these points are evidence of the wholeness and connectedness we find in these pictures, and of the unity between life itself and the art of Anita Vik Wætthen.